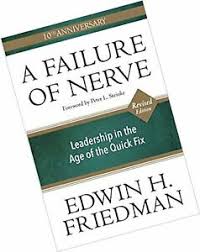 At Dorrier Underwood, our whole staff is studying A Failure of Nerve: Leadership in the Age of the Quick Fix by Edwin Friedman. Each of us is writing what we are seeing and sharing those writings to bolster one another’s learning. This is one of those essays, by senior consultant Doug McVadon.

We simply can’t do it the same way anymore. That’s what Edwin Friedman discovers for himself when he contemplates the “universality of… systemic principles of leadership.”

One principle (“leadership is essentially an emotional process rather than a cognitive phenomenon”) radically departs from traditional leadership models. Those models value a “logical” approach, where the person with the best ideas or best techniques or most charming personal qualities somehow shows up as the best leader.

On the contrary, Friedman says that an organization’s ability to survive crises and thrive in the midst of uncertainty depends on what he calls a well-differentiated leader. By that he means “someone who has clarity about his or her own life goals and, therefore, someone who is less likely to become lost in the anxious emotional processes swirling about.”

Like Kipling’s verse about keeping one’s head while others are losing theirs, this idea of what constitutes leadership resonates with my own experience of clients who maintain their roles in the middle of turbulent organizational changes, and who are able to effect corporate change by managing their own “reactivity.”

The point is that “teaching leadership” obviously misses the point, since, more than anything, a good leader needs to be able to separate “while still remaining connected and maintaining… a non-anxious and sometimes challenging presence.”

Friedman found he could predict how a leader was functioning within minutes of hearing people talk about their organization’s problems. Again and again, he found the “emotional processes” of an organization related to its leader’s capacity for what he called self-differentiation.

His seeing this connection as universal changed how he worked. He stopped collecting massive amounts of data about their problems and “began to search instead for the member with the greatest capacity to be a leader as [he had] defined it.” Then he began to establish leadership seminars emphasizing self-differentiation rather than focusing on method and technique.

Through the years at Dorrier Underwood, we have found that working with an executive on her vision and raison d’etre is more productive than teaching a technique or “trick”. We also have discovered for ourselves, as Friedman also discovered, “how the emotional processes of leaders’ and followers’ own families interlocked with the emotional processes of the institution in which they worked.”

After nearly three decades in this kind of work, I see my capacity as a leader depends on what Friedman describes as finally “leaving my family” in a figurative and yet tangible way–leaving behind old, largely unseen norms and rituals from the past.

“…I began to realize that before any technique or data could be effective, leaders had to be willing to face their own selves.”