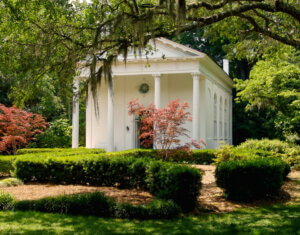 The big event, the biggest one since Phil’s stroke happened – Phil’s granddaughter, his first blood granddaughter, got married on Saturday at Carolina Grove, between Durham and Hillsborough. Really between, like woods and farms between, a rural setting.

We put on the clothes we bought just for the wedding – me, a maxi multicolored dress, something I haven’t owned in 10+ years probably and Phil, new pants, white shirt, blue tie and blue blazer, that his son helped him shop for, clothes that fit him now. The way things are now is I dress myself and help Phil dress, so we start sooner. This time, even sooner, since Phil hasn’t worn anything resembling this dressed up in years. The wedding was at 4:30, we needed to leave around 3, and we started the dressing part at 2.

The wedding was sweet and lovely, two adorable childhood sweethearts, both 29 now, mature, and living together for years, said I am ready, let’s do this now.

A little backstory: Phil and his daughter haven’t seen each other in probably 8 years. His son says she hasn’t ever forgiven him for “how he treated her mother,” and doesn’t want anything to do with him. This has been a source of sadness for Phil. He has reached out numerous times, and, when they have talked, at best, she is cordial. She is a “good Southern girl,” so she is never mean or harsh, just distant and removed.

On the way there I said “Do you think she (your daughter) will be there?” Yes, he did, as did I. Another family member helped Phil navigate the rough terrain with his wheeled walker, and seated us, and shortly thereafter, his daughter and her husband (who looks like a young Phil, by the way!) were seated in the row in front of us. Phil didn’t recognize her at first, she was wearing sunglasses (outdoor wedding) and she recognized me and didn’t recognize him – she said later, “I wonder who Jane is talking to?”

Here’s the miracle – when they both realized who each other was, Phil struggled to stand and they hugged, a good old hug. After the wedding, they talked a little, and I heard Phil say “you know I love you” and she said back, “I love you too, Dad.”

Everything we did to go to this wedding – buying and wearing clothes we may never wear again, anticipation of what it would take to do it, and then doing it – was worth it, and more. We don’t know if more will come of the moment, yet there was that one precious moment between Phil and his daughter. Phil said on the way home, “I can get complete about it all now.” To those of us who have close relationships with our children, this all may seem foreign and hard to get. To those who don’t, it occurs as a miracle.

I was very happy and satisfied.