Cultivating Productive Meetings and a Context for Action 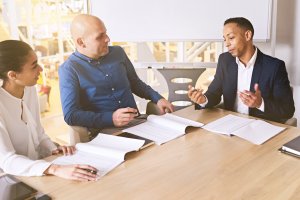 We hope you enjoy Danny Skinner’s reflections on what it takes to run an effective meeting. Danny is a project manager at Minnesota Street Project.  We had the privilege of working with Danny when he was at the Crow Museum of Asian Art in Dallas, Texas.

“How come we still have the same issues after discussing them in our meetings week after week?” Short answer: Because discussing is how we communicate or align on what the issues are. We resolve issues only by taking action.

Having been involved in creating a culture for action at multiple organizations, I have learned that meetings are where action either starts or stalls. I want to share some strategies to transform unproductive meetings (and in turn whole organizational cultures) into productive ones, with a focus on mutual respect, trust and a context for action.

First, I want to get clear, through contrast, what I mean when distinguishing unproductive meetings from productive ones:

A meeting does not become productive simply because the participants earnestly agree that it should be so. Bearing in mind that situational differences and purposes could require some degree of flexibility, Ioffer a few guidelines that I have found effective.

To keep a meeting on track and produce results, the group empowers three different functions, either prior to a meeting or immediately at its onset: leading/facilitating, time-keeping, and note-taking.

The leader/facilitator is responsible for sending out the agenda in advance and, in the meeting, moving the agenda items toward the stated outcomes. This does not mean the leader is the main person talking. The leader introduces each topic and promotes participation among the group members as he/she/they keeps the conversation on topic and steers it toward action (offers, requests and promises) to reach thestated outcome.

The time-keeper is responsible for keeping the leader and other meeting participants informed of how theteam is doing with regard to the times set for the various topics.

Out of respect for all meeting participants’ time, meetings start and end on time without exception.

The note-taker provides a link to the future by keeping critical decisions, promises, and unresolveditems in existence so they do not vanish as soon as everyone leaves the room. The note-taker can also send the meeting notes to participants so that they can own what the meeting accomplished.

Meeting participants can take turns carrying out these functions from meeting to meeting so that, overtime, everyone becomes comfortable performing any of them, even with little or no notice prior toassignment.

The leader/facilitator sends all meeting attendees an agenda (including Outcomes) at least 24 hours,but typically 48 hours, before the scheduled meeting. Using a digital format with shared access allows participants to submit additional topics with an estimate of how much time they require if the original agenda has space for additions.

Agendas include Outcomes, Topics to produce those outcomes, and an estimate of the amount of Time each topic will take.

The Outcomes state what the group wants to accomplish. The group addresses Topics that they judge will achieve those outcomes and attempt to produce the stated result in the Time available. Measurable Outcomes provide a clear picture of how the team will know when they have accomplished those Outcomes. (There is no law that says a meeting has to last as long as it isscheduled!)

A meeting Leader may need to spend the first few minutes of a meeting reviewing and getting thegroup’s alignment on the agenda’s Outcomes and Topics.

The Leader or the group might see that some results could be better achieved in another way than in this particular meeting (and the Note-taker records those changes):

Sometimes the group will need to explore topics beyond their appointed times or deviate from a topic to explore something tangentially related. The Leader acknowledges the deviation and gets renewed alignment on the altered agenda. The Note-taker records any changes and the purpose for them.

To increase the likelihood that promised actions actually happen, the Leader can insist that both theperson making a request and the person making a promise make notes of the promise. This involves clarifying exactly what is being asked and agreed to and exactly by when. Ideally, the parties then putpertinent entries in their respective calendars.

In the end, everyone takes notes of what matters to him/her/them: their requests and promises for sure, ideas they want to follow up later, something they hear that affects another of their projects, and important changes in protocol, policy or procedures.

Notes are not transcriptions of meeting dialogue. If that’s important for a given meeting, tape it. In general, notes should be able to quickly impart meeting highlights to any invitees unable to attend. Keep in mind that if an invitee is unable to attend, but critical to an agenda topic, that topic should be rescheduled to a time when all necessary parties can be present.

And since meetings that accomplish something are more fun, people may start to look forward to theminstead of dreading them. The more you engage in the process, the better the meetings get. In whatever way you participate, you are designing the future instead of sluggishly repeating an out-worn past.